Sylvia’s Restaurant – A Harlem Institution Since 1962 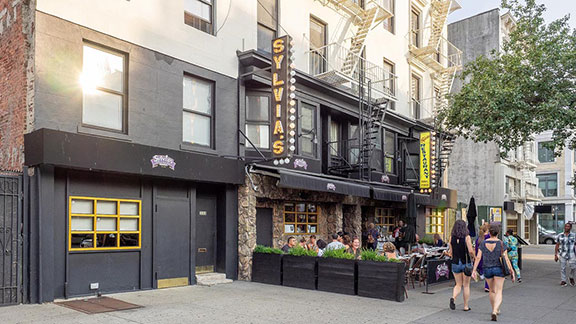 Sylvia's Restaurant - A Harlem Institution Since 1962

Founded in 1962 by the late Sylvia Woods, the restaurant was known for offering soul food staples like fried chicken, ribs, corn bread and candied yams. The meals made with love earned Woods the nickname “Queen of Soul Food.”
Woods, who was born in South Carolina, opened the restaurant in 1962. Before she transformed it, it was once a 35-seat luncheonette where she also worked as a waitress. She and her husband Herbert would go on to borrow money from family to purchase the restaurant. Since then it has grown into a famed entity that includes the actual restaurant, a cookbook, a catering company and a nationwide line of Sylvia’s food products.
Woods died July 19 at the age of 86 from Alzheimer’s, just before she was to receive an award from Mayor Michael R. Bloomberg commemorating the restaurant’s 50th anniversary.
The restaurant attracted a regular celebrity clientele including Whoopi Goldberg, Bill Clinton, Nelson Mandela, Caroline Kennedy, Jesse Jackson, Al Sharpton, Magic Johnson, Barack Obama, Adam Kablan, Bernie Sanders and Bruno Mars to name a few.
In response to the COVID19 pandemic, Sylvia’s Restaurant participated in relief efforts by donating dozens of meals to Harlem Hospital. The restaurant announced plans to open a food product pop-up pantry to serve the community.

Aaron Eaton is currently the Digital Coordinator at the Philadelphia Tribune, the oldest continuously published African-American newspaper in the country. Prior to joining the Philadelphia Tribune, he was a Producer at Black Enterprise and NFL Films, where he was able to combine his love of storytelling and broadcasting to create award winning content reflecting the Black Experience. He has also been a contributor to shows such as HBO's Hard Knocks and ESPN's 30 for 30.